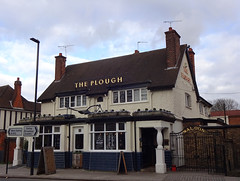 Modern-style Fuller's pub in Ealing, near to Northfields Station. Refurbished from its former rather run down state in 2005, it has now rebilled itself as an upmarket, gastro-pubby establishment, with good food and a wide range of bottled beers and ales.

They have London Pride and ESB on at all times, with Chiswick, Discovery and guest ales from the Fullers range (and acquisitions, notably Gales) on from time to time. The beer is generally kept well, although they do not move as much ESB as Pride, and the Pride is often better kept. They have a small range of "standard" lagers on tap, along with Strongbow, Leffe, Fruli and Fullers Honeydew. They claim to have the widest range of bottled beers in Ealing, and it is easily believable, covering European beers as well as those from wider afield and a good range of Fullers bottled ales.

The food is standard pub food style, often with a "gastro" twist, with occasionally fancier specials. Quality is good and prices range from £6-£15 for mains.

There is a good sized garden outside, with kids play area, tables and a BBQ that is occasionally used in summer. There are also patio heaters for the colder months. There are fireplaces inside that are lit during the winter, keeping the pub nice and warm.

On the Thursday evening of our June 2009 visit, several of the tables were pre-booked due to the live jazz later that evening.

Accessibility: The front entrance has steps, but there's a ramp around the side (removable, and I didn't check to see if there's a bell to ring if it's not there). Once you're in, it's step-free including to the toilets.