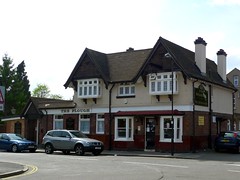 Very much a locals' pub, but a far from unpleasant one, in Southall.

The pub is still clearly split into saloon and public bars, with the bar area between the two. There are separate exterior doors to each and no internal link between them. Service is friendly and the few other drinkers were welcoming on Ewan's visit. The publican let me go through the bar area to get between the two spaces (though Kake, arriving later and guessing wrongly as to which half Ewan was in, was sent back out again to go round to the other door).

The public bar is smaller, with a pool table, while the saloon bar is a far larger space, with carpets and a TV showing gameshows. There is also a counter which suggests the pub may serve food, though there was no sign of this on an early evening December 2008 visit. The publican kindly let us eat a couple of the samosas Kake had just purchased from Shahanshah across the road, since we were a bit peckish, but it's probably best not to rely on this being allowed. A reasonably large beer garden is out the side of the saloon bar.

There are no handpulls for ale (though they have John Smith's). Beck's Vier was off on Ewan's visit, but there was Stella (£1.55/half) and the other usual suspects including Guinness, as well as Strongbow cider (£1.45/half).