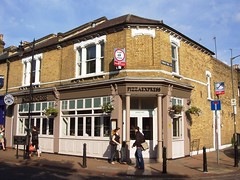 This branch is sited in the old part of town (a conservation area), so the building and street look very pretty. Inside, there is a front area by the windows which gets all the light, with just as many tables down a corridor past the kitchen at the back of the restaurant, much darker (there are some skylights though).

The menu is the same as every Pizza Express. Ewan had a pizza from their seasonal menu (which in April 2008 was based around tomatoes), the Quattro Pomodori (four tomatoes, £8.95), which was exceptionally good, with a very thin crust and cherry tomatoes with pesto and a couple of stalks of asparagus placed carefully in the middle. Jo had the Funghi di Bosco (mushroom, £7.10) and was a bit dismissive of them changing the named (adding the "di Bosco") and charging more money for it, but was still very happy with this basic pizza.

The starters were also great (both from the seasonal menu): a stuffed pepper, and an avocado salad. The balsamic vinegar they poured over the former was particularly good. Dessert was a simple vanilla ice cream and espressos for both of us, of which I have no complaints.

Staff service was generally very attentive and pleasant. Tap water came very quickly without demurral, though the house white wine tasted a little off (or maybe that's just the style). There only seemed to be a few waiters, so we had to wait a little while for the bill, but in general the experience was perfectly good.