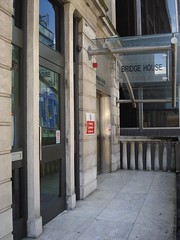 A branch of the chain of pizza restaurants, near London Bridge Station.

Bec wouldn't normally think of reviewing a chain place like Pizza Express, except that going here was the weirdest dining experience in recent memory. Sean ordered some chicken pizza I can't remember and I had the Giardiniera which had asparagus, artichokes, mushrooms, red peppers and santos tomatos on a sauce of tomato and pesto.

I asked for the pizza to be without mushrooms and when it arrived, I cut into it to find a mushroom slice. I have a real fear and loathing of mushroom so I asked for it be taken away. The server took the pizza and there was a little conference over it, then she returned it and said 'that's an artichoke'. Now, I'm not exactly a rocket scientist but I assure you I can tell the difference between a mushroom and an artichoke. So I cut further into the pizza and lo and behold, more mushrooms.

They did fast-track my non-mushroom pizza but I wasn't overly impressed. Also, we were sitting right next the fridge with all the beverages and Sean had to ask at least three times for another fizzy pop even though it was right there.

Finally, as the server took away our empty dishes, Sean was sure he heard her say 'All finished? Well done, guys!' Er, thanks mum, now can we have pudding? In fact we did have pudding, Chocolate Glory, a vanilla ice-cream brownie sundae with chocolate gloop and chocolate pieces.