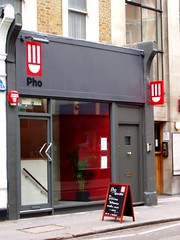 A Vietnamese place near Oxford Circus Station in Fitzrovia. This restaurant opened as a branch of the original restaurant in Clerkenwell in March 2008.

From evidence of an April 2008 visit by Ewan and Bec, the place fills up quickly at lunchtime. There are places for about 30-40 upstairs, with tables closely packed in. They have a downstairs eating area, but it seemed as if they weren't using it. On an evening visit in November 2008, the restaurant was also busy right up until closing time, with the downstairs area again out of use.

Service is efficient, they were happy to amend an order to remove mushrooms, and the kitchen staff showed particular attention when bringing the food to explain how to eat it. Nevertheless, some may find the optional 12.5% service charge to be a little steep. The bowls of pho we ordered came with a plate of various fresh herbs (such as coriander and mint), chilli, bean sprouts and lime which could be added as desired. There were also unmarked containers of sauce on the table for extra flavour.

The pho was plentiful and some other diners even got special bib napkins to tie around their necks to prevent splash-back (I did not, perhaps didn't know to ask). The noodles were fairly basic, but the soup itself (we both had vegetarian versions of the traditionally-meaty broth) was subtle and flavoursome. The Pho Chay (tofu; photo) was £6.50 and the Pho Nam Rom (enoki, shiitake, and button mushrooms; photo) £7 to eat in - though they do most of the dishes for takeaway, for around £1 cheaper.

There is a wine list, a selection of beers (mostly Vietnamese) and teas, and some soft drinks - carrot, apple and ginger juice and homemade lemonade were both rated highly by your reviewers. "Weasel coffee", previously regurgitated by small mammals, was being sold in "espresso-size" servings as a Vietnamese delicacy in November 2008. Your reviewers found to be extremely good, both with and without condensed milk.

On a visit in December 2008, they turned the deep-fat fryers off at 10pm, which prevented us from trying the banana fritters from the dessert menu.