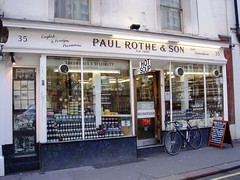 A gloriously old-school, traditional delicatessen and cafe in Marylebone, founded in 1900.

Paul Rothe & Son, still family-run, is one of the wonders of an era slowly dying out and being replaced by the ersatz. Hand-lettered overly fussy signage lists the sandwiches and soups on offer, while beautifully perfunctory furniture allows about eight groups of four to be seated. The walls are shelved largely with jams, preserves, chutneys and pickles, as well as some other deli products.

Sandwiches are prepared at a counter by the friendly staff, and the selections are interesting, with plenty of vegetarian options (including soup and a vegetarian scotch egg, £1.30 and made in the traditional way except with a layer of spicy lentil paste encasing the egg rather than meat photo). They do basic combinations with good ingredients, and have a range of their own fillings made on the premises (the kümmel cheese is particularly good: a cream cheese with stilton and carraway; they have their own excellent hummous, and a green olive pâté; or a wild boar and armagnac pâté for the meat-eaters). They do have speciality breads (baps, ciabatta, foccaccia) for a little extra, and customers can add ingredients (lettuce, salad, egg, etc.) for a small amount. (However, those looking for a fully-loaded sandwich are advised to try Fitrovia for plentiful sandwich shops of that nature.)

There are also a selection of biscuits and cakes, simple and satisfying.

On one visit, Ewan had just an artichoke sandwich on buttered granary bread, but in its simplicity it was so well done that it was the best thing I'd eaten all week. Most basic sandwiches such as this are around £2.50, which isn't cheap but is nevertheless worth it, not just for the excellent quality but to support a real London institution.