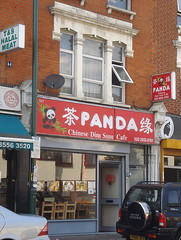 It's quite small, seating only about 30 people at light wood tables and chairs of plain and simple design. The walls are painted plain cream with just a few decorations. An open kitchen at the back allows full view of the chef at work.

The chef specialises in dim sum, but the menu also includes a few Sichuan dishes as well as fried noodles and fried rice. According to a staff member in August 2014, all of the fried dim sum and some of the steamed dim sum are made in-house.

Kake visited on a Friday afternoon in August 2014. There were half a dozen other people in when I arrived a little after 3pm, though still plenty of spare tables. No music was playing.

A dish of sunflower seeds photo was brought as I sat down; these were well-roasted and beautifully savoury.

Dan dan noodles (四川担担面; Sìchuān dān dān miàn; £6) photo included plenty of Sichuan pepper and was generally well-executed, though the noodles were a little undercooked to my taste. There was plenty of pork in it too — possibly more than I actually wanted. Although served dry-style rather than soupy, there was just enough oil to stop it from being too dry.

A small dish of watermelon cubes was brought as I finished. Service was friendly and helpful. No service charge was added to the bill.

Accessibility: A small step to get in. Two more small steps to get to the accessible toilet (which has a pull-down baby change table).