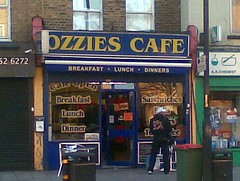 bob visited on a Saturday lunchtime in January 2009. There was ample space; they can seat 30-40 people in total.

They serve the normal range of breakfasts and meals you expect from a greasy spoon, including eight set breakfasts. I had Set 6 (£4.50) photo which was fine. The bacon was thick cut and still a bit soggy, but it was generally OK. The egg was competent but had less yolk than I like. The black pudding was average, and the beans were slightly below par. The bubble was quite good. The tea was drinkable and strong. The bread was okay but would have been better toasted.

bob's verdict: I'd come back if I happened to be nearby; then again, it was the only obvious greasy spoon in the area.