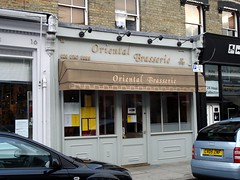 Chinese restaurant in Chiswick, just off the High Road. They serve dim sum at lunchtimes; noon-2:30pm Mon-Sat and noon-4:30pm Sun.

Bob went for dim sum on a Thursday lunchtime in March 2008. It was OK, though they had run out of both char siu buns and chicken buns. The deep-fried squid with salt and chilli (£2.20) was quite tasty photo. The dim sum platter photo was quite good value at £5.50. They asked what I wanted the char siu buns replaced with, and I chose the prawn and coriander steamed dumplings. The curry puffs photo were OK. I had to specifically ask for the dim sum menu.

They seem to do a good value special lunch menu. The main menu looks interesting as well.

On a visit exactly a week later we again found that we had to ask for the dim sum menu. Despite (or maybe because of) being the only customers in at that point, dim sum took a little while to appear. However, a very tasty lunch was concluded well within an hour.