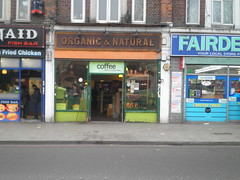 There's a small cafe in the back, with some interior seating and also a patio garden photo with several tables, most under cover. Good coffee, and an internet terminal.

Kake, bob, and others visited on a Sunday lunchtime in September 2010. Freshly-squeezed orange juice certainly tasted very good and fresh. Organic white tea, made with a teabag from Solaris Tea, was OK. Kake's slice of spinach quiche photo was served hot for some reason, reheated in the microwave to produce soggy pastry and slimy spinach. If I came back, I'd specifically ask for my quiche to not be reheated.

Accessibility: I think there's a small ridge to get in but no step. Step-free through to the cafe service counter and some of the seating. Three steps up to get into the garden.