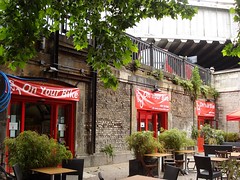 Previously located in one of the railway arches on Tooley Street photo, in early 2013 it moved to Montague Close (next to La Cave) to get out of the way of the redevelopment of London Bridge Station.