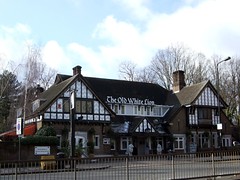 Pub right next to East Finchley Station. It's part of the Mitchells & Butlers Castle sub-chain.

This large pub has plenty of space for drinkers, with several rooms. The bar is opposite the main entrance, with seating around it. There's also a separate room to the right of the bar, with sofas and spacious tables. The place feels cosy despite its spaciousness, with decor suited to the up-market local population. There's a large beer garden out back as well.

There are several handpulls for beers, with London Pride, Landlord, and some guests on, including a mild on Ewan's February 2009 visit.

The food menu is standard M&B pub grub, including burgers, salads, pies, pasta dishes and the like photo of menu. Ewan's spinach and lentil burger (£8.40 including blue cheese, mushroom and BBQ sauce on the side) was tasty, with a reasonable amount of chips photo, though could perhaps have been a little more for the price. Jo enjoyed her halloumi salad, which had three large chunks of halloumi, and also included mushrooms, and was served with croutons on the side photo.