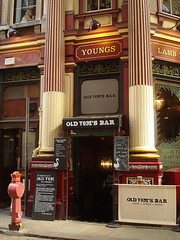 It's physically underneath the Lamb Tavern, and according to the 2015 Good Beer Guide it's under the same management. The Good Beer Guide also states that it's available for hire.

It's clear that you're in a basement here, with curved brick ceilings overhead. The walls are glazed rectangular tiles beneath a dado rail, and plain painted above with old portraits and drawings here and there. Mismatched upholstered chairs cluster around tables — mainly small two-person ones, but there's one longer one that could seat 8-10. Floors are slate tile and hardwood. The lighting is kept dim, with electric lighting augmented by candles in jam jars on the tables.

They don't serve full meals, just cheese, bread, charcuterie, and such. Cured meats hang behind the bar, with a slicer below; sausage rolls stand on a wooden display rack; and a basket of artisanal bread sits on the bar next to a pile of chopping boards photo.

Kake visited on a Monday afternoon in September 2014. There were only two other customers at 2pm, though the rest of Leadenhall Market was quite busy. Music was playing, fairly folksy, at a level that would likely have been too loud with the place full but was OK with just a couple of us in there. Service was friendly and welcoming.

The handpumps offered Sambrook's Pumphouse, Young's Bitter, and Young's Special. There were also keg fonts with, among other things, Young's London Stout. A glass of lime and soda (with cordial in, not just slices) was free of charge, even though I wasn't buying anything else.

Accessibility: It's in a basement, with a flight of steep, narrow stairs to get in. Bar, seating, and toilets are all on the same level once you get down there.