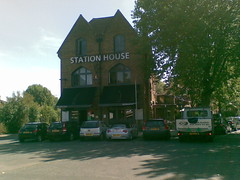 A gastropub near Chiswick Station.

bob visited on a Wednesday lunchtime in August 2009. There were a few other customers inside and quite a few outside. The pub has a large area full of sofas and some tables. There is also a section set out for dining.

The menu is pretty standard gastropub fare. There were also four or five specials on a blackboard. bob had a decent enough beef burger(£10) photo, although the salad could have been dressed a bit better, as it was drowning in oil with no vinegar to cut it. The chips were pretty well-cooked although they were pre-salted. Food is served daily at 10am-noon (breakfast), noon-4pm (lunch) and 6pm-10pm (dinner).

Accessibility: All entrances have a step, though the one round the back is quite small. No accessible toilets, but all are on the same level once inside.