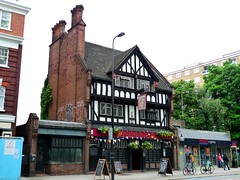 Previously a fairly standard pub, it was acquired by Antic in early 2010. In late 2020, a notice appeared on the Old Red Lion website stating that several pubs, including this one, had been taken out of the hands of Antic and transferred to the management of Portobello Brewing. In November 2021, Portobello announced that it had acquired the freehold. We haven't visited since the transfer from Antic to Portobello, and so some or all of the details below might be out of date.

Inside there are all the hallmarks of Antic's house style, with quirky decor (dolls houses and all sorts of knick-knacks adorn the space), recycled antique furniture, a range of comfy leather couches, and tables of several heights. There are three rooms inside the pub, one on either side of the central bar (the far one is reached via a low-height doorway) and one to the rear with doors opening straight on to a fairly large beer garden. This gives the rear room the feeling of a conservatory. Additionally, there are little nooks in the side of the room with smaller tables. When Ewan visited, all the pub's doors were wide open which made the place a bit draughty but would be lovely on a warmer day.

The bar features six handpulls, four at the front and two on the rear. A range of independent brewers including Harviestoun (£3.65/pint), fff and Cottage Brewing were represented on Ewan's June 2012 visit, as was Old Rosie cider.

There is a kitchen and as of November 2010, food is served noon-3pm and 6pm-10pm Mon-Sat and noon-5pm Sun. A fairly short menu is set out on each table, which also offers bar snacks like scotch eggs (£2.50) and pork pies (£3). Ewan's chilli pork pie was served with picalilli and a small green salad, and was good quality.