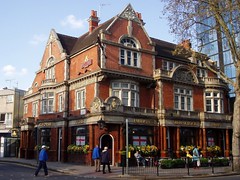 It's split into two parts; the front part is a fairly normal pub photo and the back is a 40-seater Thai restaurant with table service (and a skylight). We didn't spot a beer garden but they do have a courtyard thing with four tables. The pub part is made up of four areas connected by large archways; we suspect these may have once been separate bars. At least one of these areas has nice big tables suitable for larger groups.

Food is served noon-10pm Mon-Thu; noon-10:30pm Fri-Sat; and noon-10pm Sun. They have a handful of English dishes on the menu as well as Thai food (at least at lunchtime), and you can eat in the pub part too if you prefer (though you can't order food at the bar; you have to go around and order in the restaurant part). They also do takeaway at slightly cheaper prices. The food is pretty good; although Kake cannot speak for its authenticity, it's well-prepared and tasty. The lunch menu and evening menus are different. In the evening (as of April 2008), starters are all £4 or £4.50, and curries are around £6 (beef/chicken/pork) or £6.50 (prawns). Note that these prices are not as cheap as they might seem, since rice (£2.50) is ordered separately.

Bob visited on a Wednesday lunchtime in April 2008 and sat in the restaurant part. A pint of lemonade and lime was £2.65. I ordered the starter platter (£5), which had one piece each of deep-fried chicken-stuffed moneybag pastry (OK; though I couldn't tell the filling was chicken until I looked it up on the menu later), spring roll (pretty good), prawn-chicken toast, satay, and deep-fried wonton photo. My main was pad gra prao with pork (£5.75); actually pretty good, with decent-sized bits of meat which weren't overcooked. It was the hottest version of this that I've had in Chiswick so far. It came with plenty of rice and a decent amount of sauce too photo.

We (Bob, Kake, and Ewan) also made an evening visit later that month. We'd visited specifically to try their special St George's Day delivery of Fuller's 1845 on draught (£3.25/pint), so it was a little disturbing that they got the pump clips wrong at the start of the evening and served two of us Fuller's IPA instead. (The IPA was also a special, for the Fuller's spring festival.)

Foodwise, we started with the "royal" starter platter (£6.50/person) this time photo; Kake was particularly impressed by the Thai-style fish cakes (tod man pla), which were tender and not too greasy, and actually had a bit of a chilli bite to them (sliced fresh green chillies were visible in the mixture). Much nicer than the hard and unpleasantly chewy things you sometimes get. Since Ewan is vegetarian, we also got some deep-fried tofu (tao hoo tord, £4; OK but bland) and vegetarian spring rolls (pohpia tord, £4) photo. For mains, Kake had the roast duck in tamarind sauce (ped makham, £8.50) photo with sticky rice (£2.50) on the side; both were good, and generous enough portions that I ended up taking half of it home in a doggy bag. Bob had jungle curry (kaeng pah, £6) with coconut rice (£2.50), and Ewan's vegetarian green curry was adjudged to be most excellent but defeated him and couldn't quite be finished photo. Note that no vegetarian dishes are specifically marked, but any dish on the menu can be made vegetarian upon request.

Since it was St George's Day, the barstaff brought around little complimentary portions of sausage and mash for anyone who wanted it, which was quite a nice touch.

bob visited again on a Tuesday lunchtime in July 2009 and had the jungle curry (£5.75) and jasmine tea (£1.50). The jungle curry sauce was a bit thin but certainly had the chili kick I was looking for; it was mouth-numbingly warm. The lunch menu is served till 5pm.

Now possibly from 9am. A range of sandwiches is available all day as well as the Thai food.