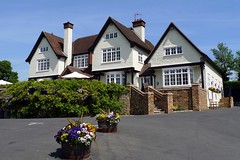 Previously a restaurant called Edwinns Brasserie, it was refurbished and reopened as a pub in 2010. It has a large terrace and beer garden with a fantastic view photo.

Inside, wooden panelling and bookshelves dominate, with a couple of spaces on either side of the island bar. There's more seating outdoors, in a terrace along the front of the pub and in a beer garden to the side. Outdoor seats have large canopies to protect those seated there from the sun.

There are eight handpulls for ale, most locally sourced. They also have as a regular their pub co's own brew (Brunning and Price Original Bitter), brewed near Manchester. The range of keg beers is fairly standard, but includes Leffe.

According to their website as of September 2011, food is served noon-10pm Mon-Sat and noon-9:30pm Sun. The food offering covers a good range of options, and during summer there's also an outdoor barbeque. Ewan tried a herbed quinoa salad (£11), which was excellent quality, while his friends had a fish from the BBQ which arrived rather quicker, but was also good quality.

The size of the car park suggests how most people are expected to arrive, as it's down a small country lane (Jacks Lane) off the main road, with no pavement. However, for those so inclined there are buses serving Harefield Green from Northwood Station and Uxbridge Station, and from there it's a short 10 minute walk to the pub.