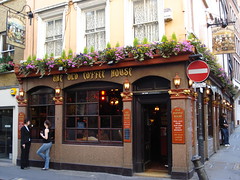 The main drinking area is all on one level, with smaller tables around the side and at the front, and larger tables with leather banquettes at the back, under a TV screen showing sport. There's also a bookable function room on the first floor. This has a small bar, and on our May 2013 visit they were willing to send down beer orders for more interesting stuff from downstairs via a dumb waiter.

When Kake visited on a Tuesday late evening in July 2007 it was low-lit and rather shabby in a Soho kind of way, and not very busy. On Ewan's visit on a Thursday evening in October 2008, all the tables were taken not long after 5pm and the place only got more busy and crowded throughout the evening. Our most recent visit was by bob and friends on a Saturday afternoon in May 2013, having booked the function room for a meetup. This time it was quiet on the ground floor when we arrived about 12:30 but when we left our upstairs room about 3ish it was relatively busy downstairs so we had to wait a while for a table.

On our May 2013 visit they had Brodie's ales on handpull as well as several on keg. The Brodie's Mild was very good. They also had interesting guest ales, including the Pitfield 1792 Imperial Chocolate Stout (which bob didn't think was very nice, though this wasn't the fault of the pub).

They do basic pub food at reasonable prices (menu photo 1, menu photo 2), possibly only at lunchtimes though (noon-3pm Mon-Sat, according to Time Out as of April 2008). In May 2013, bob had the scampi and chips (£7) photo, which arrived quickly. The quality was OK, and it was a good price for Soho (if I'd paid more for it I'd not have been pleased). DrHyde had the steak and kidney pudding (£7) photo, which again was OK.