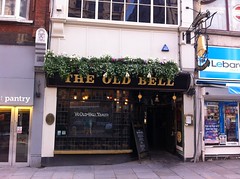 The pub is quite small and has an entrance at the back as well.

bob visited on a Monday evening in September 2014. There were a few other customers in — a mixture of tourists and workers.

I had an adequate pint of Sharp's Atlantic (£4.65). They also had Nicholson's Pale Ale, Tribute, Forest Hare, and Old Ghost.