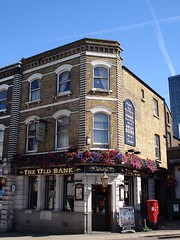 Pub in Sutton, very near the station. It was previously a Smith & Jones pub (Bramwell Pub Company), but according to the August/September 2014 London Drinker, it was sold to the Stonegate Pub Company in November 2013; not much seemed to change about it though.

Entry is into a fairly spacious bar area with high chairs and tables by the large front windows looking onto the High Street. Opposite the bar itself are several booths with comfy banquette seating, and further back are a couple more seating areas (one up a few steps) with normal chairs and tables. There's a beer garden, reached via the higher seating area.

Kake first visited on a Friday morning in August 2012. Although I arrived mere minutes after the opening time of 11am, there was already one other customer in, and by 11:30am there were four more. Music was playing quietly. On another visit on a Tuesday afternoon in November 2018, there were around half a dozen other customers when Kake arrived around 2pm, and it got gradually busier until it was quite lively by 5pm, though there were still tables free. The flatscreens were showing tennis with the sound off, and music was playing, not too loud.

Food is served, apparently all day, from a fairly standard menu including breakfast until noon. In November 2018, Kake's mini nachos (£4) photo were about what you'd expect from a chain pub that doesn't particularly specialise in food. The tortilla chips were a little stale, the cheese wasn't distributed very evenly, and the salsa tasted of jar, but it was a decent portion for the price.

They have free WiFi via My Smart WiFi, and a sign invites customers to feel free to charge laptops and phones.

Accessibility: A step to get in (around an inch on one side but larger on the other) but there are no further steps to the bar or most of the seating once you're in. There's an accessible toilet on the ground floor, with a RADAR lock and a sign stating that a key can be obtained from behind the bar. Other toilets are down a narrow flight of steps with a sturdy handrail on one side.