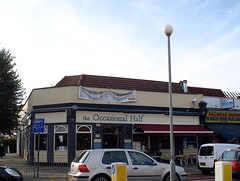 Pub on Green Lanes in Palmers Green (note: Green Lanes is pretty long; this section of it is (just) in the London Borough of Enfield, rather than that of Haringey). It was previously owned by the Bramwell Pub Company (formerly Barracuda), but according to the August/September 2014 London Drinker, it was sold to the Stonegate Pub Company in November 2013. We haven't visited since the change of ownership, so some of the information below may be out of date.

Kake visited on a Sunday afternoon in September 2008. The place was practically empty; there were just a couple of people watching football on the large flatscreen, and a couple of others sitting outside on the canopied pavement seating. A sign outside advertised food between noon and 9pm (a permanent-looking sign, so I assume this means Mon-Sun).

It's quite big, and some of the seating is raised up on little daises. There are at least three flatscreens/TVs, giving sports coverage to most if not all of the pub. There's also a small pool table.

They have two handpumps, and the beer is very cheap; the Bombardier that was available on my visit was £1.95/pint, and the Theakston Best that usually resides on the other pump would be £1.65/pint. Unfortunately, my Bombardier was off - sour-tasting and sour-smelling. The young man behind the bar took it back straight away and turned the pump clip around. He offered me John Smith's as a replacement; I accepted Strongbow instead, and he gave it to me at the price I'd already paid for the Bombardier.

Accessibility: Level access to the bar and to some of the seating area, but the toilets are up a couple of steps. There was another door which may have led to an accessible toilet but I didn't get a good look at it.

Comment added by Robin: May 2010 - based on last six visits in past month, the current landlord knows how to look after real ale. Usual beer is Bombadier at £2.