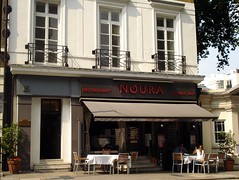 Lebanese restaurant in Mayfair, part of a small chain.

Kake and bob visited on a Tuesday evening in December 2008. We arrived quite early, and although we hadn't booked there was no problem finding us a table - indeed, the place remained very quiet throughout the evening.

They seem to be aiming for an upmarket feel. The interior has fairly smart white-tablecloth kind of decor, and service was quite attentive, perhaps overly so. Bottled water (Voss, £4) was presented with an amusing degree of ceremony, with a great deal of emphasis being placed on the "designer" bottle (a nice enough cylinder of thick glass surmounted by a cheap-and-nasty plastic lid).

We decided to go for a selection of mezze, rather than starters and main courses. We initially chose eight dishes, and were talked into a couple more, which in the end meant there was too much food.

Hoummos (£5.75) and falafel (£6) were both quite average, nowhere near as good as the renditions we recently had much more cheaply at Troia. Foul moudammas (fava beans in sauce, £5) came in a large portion and had a decently lemony flavour, but the skins of the beans were very thick and tough. Habra nayeh (lamb tartare with garlic puree, £9.75) was strangely flavourless, with very little garlic flavour (and was also smoother than we would have liked, though this is a personal preference thing rather than an actual criticism - we should have gone for one of the raw lamb dishes which was explicitly described as being "diced").

For dessert, bob had some baklava; they were served fridge-cold, which made the fat very claggy. We also got a complimentary free dessert, which was good and refreshing and involved rice in some way - but when Kake asked a waiter what it was called, he simply said "I don't know" and then vanished, an odd contrast to the solicitousness of the service earlier in the meal.

In total, we paid £35/head for the food alone, with a couple of bottles of wine coming in at £24 each. The £2/head cover charge that had been threatened on the menu did not materialise, and service wasn't auto-added to the bill.

There's a small amount of seating outside, and you can hire a shisha/hookah to smoke out there.

Kake's verdict: As far as the food goes, I felt this was overpriced for what we got; too many dishes were just average. I suspect we were paying a premium for the over-attentive service and the location.