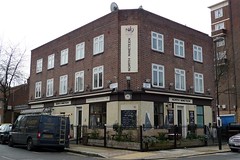 Pub in Upper Holloway, between Holloway and Hornsey Roads.

Rebuilt at the same time as the surrounding post-war estates, this isn't the most attractive of buildings, but what it lacks in looks, it more than makes up for in quality of experience. It has been outfitted with large solid wooden tables and comfortable sofas, over several rooms around a central bar. Staff service from the bartender was also excellent and very attentive.

There are two entrances, with the main bar (and a side room with more tables and a darts board) accessed via Sussex Way, while a lounge to the rear can be accessed from Kingsdown Road (the men's toilets also opens on to both rooms).

There are three handpulls for ale in the main bar, with another few in the rear. Regular ales include Skinner's Betty Stogs and Hopback Summer Lightning, and the guest ales on Ewan's March 2012 visit were Courage Best Bitter and Exmoor Gold, all at £3.30 a pint. A chalkboard by the bar lists the available ales, as well as those coming soon, almost all of which tended towards the brown. Both the ales we tried were excellently kept. Aside from beers, there's a wine list (all available in carafe or bottle, as well as glasses), and a long whisky list as well.

The other focus of this pub is on food, and they bill themselves as a steakhouse, listing a variety of excellent cuts (fillet, sirloin, prime rib and Chateaubriand among them) in several sizes. They also have a range of other pub options, and Ewan's N19 Burger (£8.50) was put together nicely in a soft bun and very tasty. Crispy skin-on chips served alongside were a definite highlight, and the coleslaw was very good too.

According to the 2011 Good Beer Guide they do a discount for CAMRA members and have barbecues in the beer garden in summer. Aside from the beer garden, there's also outdoor seating along the front of the pub (as can be seen in the photo).

Accessibility: There's a step to get in.