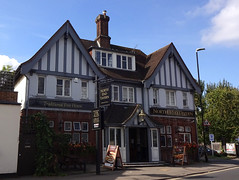 It's a fairly standard chain pub in the "hotel bar" genre pioneered by Ember Inns, with carefully "mismatched" upholstery on the chairs and all the usual box-ticking pub paraphernalia on shelves up by the ceiling: books arranged in clumps of five or six, an old-fashioned weighing scales, sports equipment, a pair of thick white never-lit candles, a pottery chicken, and so on. There are a few individual touches, though, like the framed photos of local(ish) attractions such as Banstead lavender farm and Wray Common windmill.

Seating is a mix of low and high, armchair and armless, freestanding and banquette. The floor is variously wood, swirly carpet, and checkerboard tiles. Flatscreens are mounted in several places around the room, and a dartboard hangs on one wall. Out the back is a fair-sized patio beer garden with beach huts and picnic benches.

Kake and friends visited on a Tuesday early evening in July 2017. There were quite a few people in when we arrived around 4:30pm, though still plenty of choice of where to sit. Music was playing, so quietly that we couldn't tell what it was over the sound of conversations. Three of the four handpumps were on, clipped for Young's Bitter, Greene King IPA, and Timothy Taylor Landlord. A pint of lime and soda was £1.

Food is served all day from a standard pub menu which unusually includes a gluten-free section. There's also a separate children's menu.

They have WiFi provided by MySmartWifi; not sure if this requires registration. According to a sign seen in July 2017, there's a pub quiz every Sunday from 7pm.

Child-friendliness: There were a couple of school-age children in during our visit, including one in our party, and we never felt unwelcome. The beer garden is enclosed and apparently fun to explore. There's a separate children's menu.

Accessibility: Two steps to get in. Once you're in, there are no further steps to the toilets (which include a RADAR-locked accessible one). The pub has its own car park.