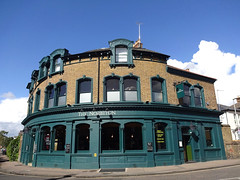 Entry is into an area dominated by the large central bar and lit by the tall windows that wrap half the space. Seating here consists of sofas, high stools, and padded benches.

Beyond this, the space used as a restaurant in an earlier incarnation has now been opened up to drinkers, giving plenty of room to sit. The wood-panelled walls are painted dark green, with areas of brickwork left exposed in between for contrast. The floor is bare-boarded, and an eclectic collection of paintings hangs on the walls. Seating is a mix of padded banquettes and regular upright chairs and tables.

There are a few distinct areas now, as well as the main bar area; one low-ceilinged and intimate, another lighter and brighter with a large skylight and patio doors onto the garden. A pleasant hedge-encircled beer garden is out the back; part grass, part patio.

Kake visited on a Monday afternoon in September 2017. There were about half a dozen other customers when I arrived around 3pm, all except one enjoying the sunshine in the garden. Post-punk music was playing, not too loud.

Only one of the two handpumps was on, offering Park Brewery Ranger (£2/half) with the other coming soon. The friendly and helpful member of staff on duty told me they're focusing more on keg because the local area is already well-served with real ale pubs.

According to the Norbiton website as of September 2017, food is served noon-3pm and 5pm-10pm Mon-Fri, noon-10pm Sat, and noon-9pm Sun. The menu consists of pizzas and salads photo.

According to a menu seen in September 2017, quiz night is Sunday.

Child-friendliness: According to a menu seen in September 2017, children are welcome but all under-18s must leave by 9pm. The menu includes one children's option among the pizzas on offer.

Accessibility: A step to get in, and another to the garden. No steps to the toilets (including an accessible one), but the cubicles in the ladies' are a bit awkward as the size of the doors means one has to straddle the loo in order to get in and out.