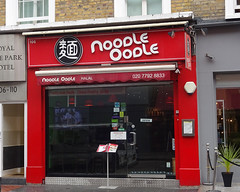 Small Chinese restaurant on Queensway in Bayswater, opened in May 2008, sister restaurant of the original branch on Oxford Street. It used to be known as Inn Noodle, but rebranded to Noodle Oodle in 2009.

Like the original branch, the decor and service are functional rather than elegant, and there's a strong focus on hand-pulled noodles, made by a chef who works on a counter facing the front window to provide entertainment for passers-by. However, it differs from the original branch in that in March 2009 it removed pork from its menu and went halal; see this Foodepedia article for more. A visitor known as SingaporeGuy tells us that there are no longer any pork products used in the kitchen, and all their meat is now sourced from halal butchers.

Kake and Leon visited on a Tuesday lunchtime in April 2009 to try out the new halal menu. Arriving around 1:30pm, there was no problem finding us a table.

Steamed vegetable dumplings (£3.20) were a little disappointing. The filling consisted of lots of spinach and pretty much nothing else; a bit more seasoning would have been welcome. Pan-fried chicken gyoza (£3.50) were OK, but the wrappers were overly thick and again the filling was underseasoned. Chicken and vegetable dumplings in vinegar and chilli oil (£4.80) were the best of the lot; nothing wrong with them at all, and Kake would happily order them again.

Kake's verdict: Wouldn't make a special effort to come here again; there's a lot of other options in the area. The halal aspect could be handy for some, though.

Accessibility: A step up to get in, and toilets are down a flight of stairs.