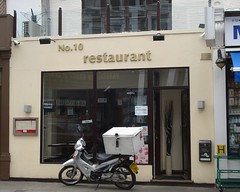 It's quite small inside, with seating for only around 20 people on the ground floor (there may be an upstairs dining area too, not sure). The decor is light, bright, and almost cafe-like in its simplicity, though it certainly isn't scruffy.

The menu offers Sichuan food as well as the usual Anglicised Cantonese stuff. Pleasingly, the Sichuan dishes are right at the front of the menu — you have to hunt around a bit if you want to order "X in Y sauce" type dishes. The menu is bilingual, but they also have a specials board which is only in Chinese. (Note: prior to their mid-2009 refurbishment, none of the Sichuan dishes were on the regular menu — they are now!)

Kake and bob visited on a Wednesday evening in September 2009 to try out the Sichuan offerings. We hadn't booked, but it was quite early in the evening and there were only a couple of other customers, so there was no problem finding us a table.

Dan dan mian (擔擔麵/spicy noodles; £6.50) photo were good and spicy, with fairly soft noodles, though bob felt they were perhaps a little too peanutty (Kake disagreed). We were both very pleased with the dry-fried green beans (乾煸四季豆/gān biān sì jì dòu, £7.55) photo, which were nicely blistered and included generous helpings of dried chillies and minced pork. Boiled beef (a.k.a. water-cooked beef/水煮牛肉/shuǐ zhǔ niú ròu, £8.50) photo was full of flavour, contradicting its rather plain translation. It was a little oilier than the version we'd had a couple of months previously at Royal Palace; Kake felt this was to its detriment, bob didn't mind.

We also tried a dish we were previously unfamiliar with: aubergine with green and red peppers (雙椒茄條/shuāng jiāo qié tiáo, £6.50) photo. This was a nice contrast to our other vegetable dish in that the aubergines appeared to have been braised rather than fried. There were quite a few interesting flavours in there, including some very lightly-cooked root ginger, and we couldn't work out whether we liked it or not.

A little while after all our dishes had turned up, the staff surprised us with another — cumin beef (孜然牛肉/zī rán niú ròu) photo — which they explained was free of charge. We aren't sure why we got given this, perhaps because they were pleased to see two non-Chinese people enjoying the Sichuan food, perhaps because they saw Kake taking photos and decided to try to butter us up in case we were from the press? Whatever the reason, we were pretty pleased with it; the scent of cumin was evident before we even got near it, though it was nicely integrated with the rest of the flavours and not overpowering, and the tender beef contrasted nicely with the lightly-cooked spring onions.

Along with a bottle of house red (£9.90) and a bowl of rice (£1.60), our final bill was £45 for the two of us including the auto-added service charge, for what would have been plenty of food even if we hadn't been given an extra dish (we left an extra-large tip to cover this).

Kake's verdict: I'll happily come back. Note, however, that the Chowhound threads linked below mention that on days when the owner/chef isn't in the kitchen, the cooking is much less competent. On another thread, howler points out that said owner is usually away in the summer, so the place may not be worth visiting then.

Accessibility: A step up to get in, and the toilets are up a half-flight of stairs.