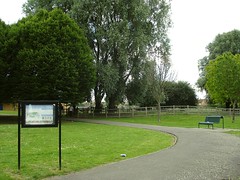 Newham City Farm is one of London's longest-established city farms; it opened in 1977. As well as the more usual kind of farm animal, it has more exotic kinds too, for example peacocks and a kookaburra; though the peacocks are caged, unlike the one we saw at [Deen City Farm]? a few months ago.

It's a working farm, and honey and eggs are available for sale (though only between 11am and 1pm). There's a visitors' centre, but it's only open for booked group visits and advertised activity days.

Entry is free (unless you're in a group which requires assistance from the staff), though donations are welcomed.