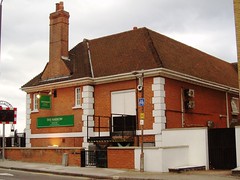 The Narrow (originally called the Barley Mow and then The Narrow Street Pub) was bought and renovated by Gordon Ramsay at the beginning of 2007. To quote the pub's website — "In its new form, Gordon Ramsay Holdings have created a warm and relaxed environment where the emphasis is on good quality food with real ales and ciders."

There are a number of separate areas; a restaurant, a conservatory, a bar area, and a riverside patio. All except the restaurant are available to non-eaters and people who haven't booked. The restaurant serves traditional British food (pie, fish and chips, sausage and mash, braised lamb — posh versions, of course), while bar food (pints of prawns, pickled cockles/whelks/mussels, potted salt beef, dressed crab/lobster, ploughman's) is available in the other areas.