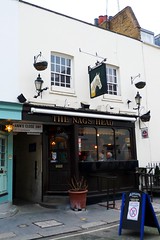 It's quite small for a pub, and split-level, with the front drinking space higher than the back — though the same bar serves both, so it's normal height for the barstaff and customers in the back bar, but only about knee height from the point of view of the customer in the front bar photo.

Although it's a freehouse, on our two visits so far all the real ales have been from Adnams — in November 2007 the Broadside (£3.60/pint) and Adnams Bitter (£3.40/pint) were both very drinkable, while in March 2010 these two had been joined by Adnams Stout. On our March 2010 visit we also noted Aspalls cider, Guinness with a notably plain font clip photo, and Bitburger served from a "fake" handpull with a keg tap behind; wine was limited to house red and house white.

The GBG says they do food lunchtimes and evenings, but on our November 2007 visit there was no evidence of food being available in the evening.

Accessibility: Several steps to get in, and the toilets are up a flight of stairs.