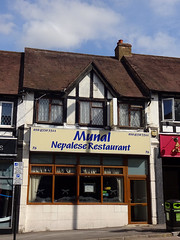 Nepalese and Indian restaurant in Worcester Park. They also do takeaway and delivery.

It seats about 50 people at fairly widely spaced tables with white linen tablecloths and napkins. A pale varnished wood floor is matched by cream and light brown walls, and the ceiling is sprinkled with recessed spotlights.

Kake and two friends visited on a Tuesday evening in July 2017. There were no other customers when we arrived at their opening time of 6pm, though some turned up shortly after and by 7:30pm there were about a dozen people in, many of them seeming to be regulars. Instrumental music was playing, not too loud.

Poppadoms and dips (50p each plus 50p per dip) photo were fine; the poppadoms were cooked competently and not greasy, and the mango chutney wasn't overly sweet (though the minted yoghurt was sweeter than ideal).

Onion bhajis (£3 for two) photo were huge, but fine, not too greasy. Momo (steamed minced meat dumplings; £4.50) photo were nicely juicy, though did contain a few too many bits of gristle.

Tarka dal (£4.50) photo was a little odd, containing random bits of barely-cooked green and red pepper. It was fine otherwise, though, with good texture, spicing, and seasoning. Aloo gobi and muttar paneer (£4.50 each) photo were both fine.

Service was OK, though seemed a little stretched once there were more people in. One of our party is coeliac, so we asked them for their allergen list, but they didn't seem to know what we were talking about. It also took ages for the bill to come at the end of our meal.

Kake's verdict: A generic high-street curryhouse; nothing special, but perfectly fine for what it is.

Accessibility: No steps to get in, just a small sort-of ramp. Three shallow steps to the toilets, with no handrail. One of the toilets is marked as accessible but was out of order on our visit.