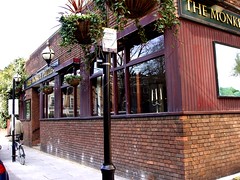 A Hall & Woodhouse pub not too far from Paddington Station.

There's a large beer garden out the front of the pub, fenced off from the (fairly busy) road, with plenty of greenery; they have barbecues out here every week when the weather is good. Inside is fairly standard pub decor, but with a sofa and a upholstered banquette just inside the front entrance.

Kake, Bob, and Richard visited on a Wednesday evening in June 2008. When Kake arrived a little before 6pm, the pub was empty but there were several older gentlemen sitting in the beer garden enjoying the sun. Inside, music was playing (Frank Sinatra, Patsy Cline, that sort of stuff); later, this was replaced by football on the TV. By the time we left, shortly after 8pm, the beer garden had filled up (though not to overflowing) with people, some of whom were eating dinner, so they do food in the evening at least.

itsbruce visited on a Monday evening in November 2008. The evening food is high quality pub fare (burgers, fish platters, pasta etc.) freshly cooked on the premises, with good vegetarian options on the menu (roast butternut squash on the last visit). Good beer (Badger beers and guest ales) but cider drinkers will be disappointed.