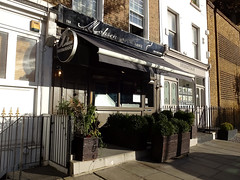 Iranian restaurant in Kensington. They're not licensed, but you can bring your own booze.

It's narrow and long, stretching back from a single shopfront. Entry is into a seating area a little like an upmarket cafe, with mushroom-grey banquettes lining each wall, pale wood tables, and cream walls decorated with 3D sort-of collage art. A tandoor oven for fresh-baked naan is tucked into a front corner by the window, allowing passers-by to watch the baker at work. Further back, down a few steps, is a separate, darker dining area lit with fairy lights.

Kake first visited on a Wednesday lunchtime in April 2009. I was on the late side for lunch, but there were half a dozen other customers still there, including a couple of older ladies who'd long finished their meal but were still hanging out and chatting. Music (Iranian?) was playing, but not too loudly.

I wasn't going to have a starter, since I don't usually eat much at lunch, but was talked into trying one; I went for the sabzi (£3) photo, which turned out to be a dish of fresh green herbs (tarragon, mint, and coriander) served with radishes, a spreadable white cheese, and two rounds of sesame bread, freshly rolled out and baked in the oven at the front of the restaurant. I only ate half of this, since I was worried about not having room for my main, but they were happy for me to take the rest home with me. I'd order this again as long as I was with someone who'd share it with me!

My main was the Wednesday daily special, khoresh bademjan (£8 including rice) photo; two large chunks of tender lamb along with half a small aubergine in a rich tomato sauce. The lamb was really tender and flavourful, and the rice was well-executed and a generous portion.

I also tried a glass of doogh, a fermented yoghurt-based drink that they make themselves; they explained to me how they make it from scratch, and that it's good for the digestion. It was quite tangy, slightly salted, and only gently carbonated. I felt it was something of an acquired taste, and didn't get too far down the glass, and they insisted on taking it off the bill.

Kake visited again on a Saturday lunchtime in November 2017. There were just three other customers when I arrived around 12:30pm, but others turned up while I was there, and there were also one or two takeaway customers. Music was playing, not too loud.

This time I went for the chelo khoresh fesenjan (£15 including rice) photo, a sweet-and-sour stew of chicken with pomegranate molasses and ground walnuts. The sauce had a beautifully complex flavour and was neither too thick nor too runny. The chicken had clearly been cooked in the sauce; there were little bits of meat that had come away and been incorporated into the sauce, and the flavours had penetrated the larger pieces of chicken quite well. The chicken itself was cooked to a "pulled" consistency, and was a little drier than ideal. Rice on the side was good; separate grains, cooked just right, and not too salty.

Saffron tea (£2/cup) was served black and unsweetened with a bowl of sugar lumps on the side. It wasn't overly strong — much less strong than the tea you get in tiny glasses in Turkish restaurants. The flavourings were quite subtle, but according to the menu included saffron, cardamom, and flower petals.

Kake's verdict: I'd come back if I was in the area. I'd like to try some of their grilled meats.

Child-friendliness: There were a couple of young children in during our visit, one of them intently watching the naan-baker at the front.

Accessibility: Two steps to get in (one of them quite large), more steps to get into the back seating area, and the toilets are down a flight of stairs with two bends and a handrail most but not all of the way down.