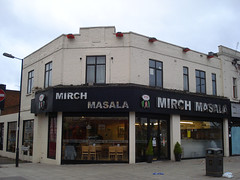 Indian restaurant in Southall, part of a small chain. It's fairly cafe-like in style, with tables set out in rows and a pretty casual atmosphere.

Kake, Ewan, doop, and Liz visited on a Sunday lunchtime in May 2009. Although the place wasn't even half-full, it was a bit noisy due to the many hard surfaces and the animated conversation of the customers, so it's likely that noise levels are pretty high when it's full.

Service was friendly and efficient. We were brought poppadoms and dips shortly after we sat down (don't know if we were charged for these), along with a large jug of tap water.

We decided to skip starters and share a few vegetarian mains — we initially ordered three plus rice and bread, but were talked into a fourth and so ended up with too much food (they did offer to pack it up for us to take home at the end though). They asked us when we ordered what spice level we'd prefer, and we asked for medium-to-hot; it came out pretty much right for all of us.

Masala bhindi (okra) had a good, rich flavour, and the okra were quite thoroughly cooked without being overcooked photo. Deigi chana methi (chickpeas with fenugreek leaves) was also just fine, with the chickpeas cooked nice and soft. Kake felt the karahi saag paneer was a little bitter, possibly because it was quite well-endowed with whole spices, but the others seemed to like it photo of deigi and karahi dishes. Kake also thought the karahi mushroom had a bit of an odd flavour (but couldn't identify exactly what the problem was) photo.

Rice was fine (though our order of pilau rice was just the same as our order of plain rice with added food colouring), and parathas arrived fresh and hot. Our final bill was £28.50; it wasn't entirely clear whether a service charge had been applied, but we made a few quick calculations and decided it hadn't, so we ended up paying £8/head for a more-than-ample lunch.

Accessibility: A shallow step up to get in. Everything's on the level once you're in.