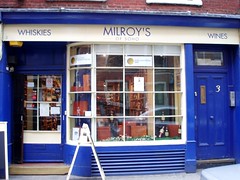 An off licence specialising in whisky, located in Soho.

This shop has an excellent range of whisky covering many Scotch malts, including some quite unusual ones, as well as whiskies from other parts of the world. Most bottlings are the distilleries' own, but there are a few of Milroy's own bottlings and some other third-party bottlings.

There is a good choice of non-Scotch whisk(e)y, including a good selection of Bourbons and single malts from Japan, Ireland and even India.

They also do other spirits, and wines, but with less extensive coverage.

Staff are friendly and helpful, and there are always a good few whiskies open for tasting.