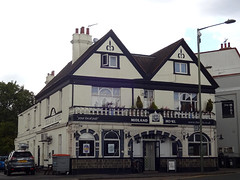 Entry is into a bare-boarded room with a mix of seating — sofas, church pews, and upholstered upright chairs — and a rather subdued brown-and-cream colour scheme photo. The bar runs along one wall, with half a dozen stools along it, and a substantial amount of space is given over to a pool table. Natural light is admitted via arched windows on three sides of the room, some of them with a few bits of stained-glass detailing. Geometric hexagon-and-square moulding adds interest to the ceiling. Further back is a cosier, more dimly-lit room, and beyond this is a beer garden.

Kake visited on a Thursday afternoon in August 2017. There were no other customers when I arrived around 1:30pm, but two turned up shortly afterwards. No music was playing, but a large flatscreen above the bar was showing the news with the sound on fairly quietly. A little while later they turned off the sound on the TV and put music on, not too loud.

Only one of the four handpumps was clipped, offering Dark Star Hophead. A pint of lime and soda was 70p.

Accessibility: A small step to get in, and another step to the toilets.