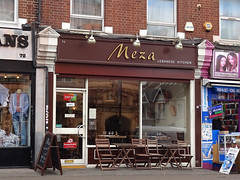 Lebanese restaurant in Tooting, near Tooting Broadway station. They also do takeaway and delivery, with online ordering via Just Eat.

The original (tiny) branch is up near Tooting Bec station. This one is larger than the original branch, but still not huge, with seats for 24 plus four stools at the bar. The decor is simple, with sturdy wooden tabletops, hoop-backed chairs, cream walls, and a pale-wood floor. Interest is added by a carved-wood wall screen and patterned wall tiling.

bob visited on a Thursday lunchtime in June 2016. There were two other parties in when I arrived a little before 1pm, and there was a steady stream of people picking up takeaway lunch boxes while I was there.

I went for the lunch box special photo of menu, which includes two meze, a main course, bread, and a choice of chips or rice for £6 photo. The meze and main course all arrived at the same time, on the same plate.

A small bowl of olives photo was brought to start, and didn't appear on the bill. The hummous was a touch too smooth, but the baba ganoush was good. The bread was average, and the chips were fine. The kafta meshwieh (minced lamb kebabs) were good. Tap water arrived on request, served from a jug with lemon, and some OK chilli sauce was brought also on request.

Child-friendliness: There are at least two high chairs.

Accessibility: Possibly a step to get in. Level to the toilet once you're in. The tables are a touch too close together for easy wheelchair access.