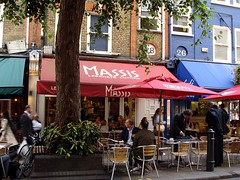 Kake, Ewan, and Peter visited on a Wednesday evening in September 2008, arriving around 8pm. All the tables, inside and out, were full, but they managed to squeeze us onto an outside table by moving people around a bit.

Since Ewan is vegetarian, we decided to share two orders of the "Vegetarian Massis" mezze selection photo along with a couple of meat-based mezze, sujuk ("spicy Armenian lamb sausages") and kibbeh kras (meatballs wrapped in a bulgar wheat crust and deep-fried). All the food was good, and the selection of dishes on the vegetarian platter was both balanced and varied.

After our meal, we enjoyed a cherry-flavour shisha/hookah, for which we were charged a rather steep £20. We also had a couple of bottles of Ksara Prieure Rouge (£16), a decent Lebanese red wine (though they accidentally charged our first bottle at a higher price, mistaking it for another of the four Lebanese reds on the wine list). The total bill including service for the three of us was just over £100.

Accessibility: It's very small and cramped, and the toilets are down a flight of stairs.