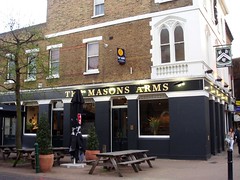 A large bar conversion opposite Battersea Park Station, owned by (but not branded as) Fuller's.

There's certainly plenty of space in here with tables stretching back into the depths of the building, and quite a few more tables outside in a small alleyway off the busy road. Music is played at volume, although not deafeningly, mostly dance and disco classics on the Saturday afternoon Ewan visited. It's not a bad place, but feels more like a bar than a cosy neighbourhood pub.

There are two handpulls for ale, both with London Pride, as well as the standard range of premium and cooking lagers, including the usual suspects like Staropramen (£3.85/pint), Franziskaner, Honey Dew, and Leffe.