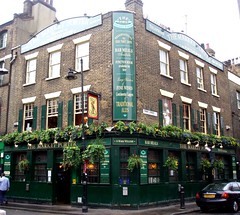 Pub located on the edge of Borough Market.

It previously served a notably wide range of real ales, normally at least eight different ones including very random things you'd see in very few other places. However, according to the Dec 2019/Jan 2020 London Drinker the range has now reduced to only four at a time.

Beer quality can sometimes be variable but it is all well-kept. They often only get small quantities in of the rarer beers, so you might find that something available at lunchtime has run out by mid-evening. Beers observed on Kake's February 2008 visit included Triple fff's Pressed Rat And Warthog (£2.75), Ice Queen, Everards Pitch Black (£2.75), and Harvey's Sussex Best. The Harveys is their only permanent resident.

There are also a number of keg draught lagers, including a couple from Meantime on a separate font (London Pale Ale and a guest, Friesian Pilsener on a May 2012 visit), as well as Hopf Helle Weisse beer, a rather sweet wheat beer.

The ground floor seating was extended some time around late 2006/early 2007, with the toilets having been moved downstairs into the basement. This has made this pub much more pleasant since you're more likely to get a seat on a weeknight. People often don't seem to notice the area at the back, so it's a good idea to walk all the way to the back of the pub when looking for a seat. Additionally, there is a lot of room outside, with people standing around inside the closed market sometimes, which sometimes means that there is more space inside the pub than you might think. If drinking outside on a busy night, your beer will come in a plastic glass (so be prepared to be asked "inside or outside" at the bar, or make sure you mention you are drinking inside if you want to get a proper glass).

However you may still have to struggle to find a seat on Thursday, Friday, and Saturday evenings, unless you arrive by about 4pm or so; the proximity of Borough Market as well as London Bridge Station means that it's very popular. It is also perhaps best avoided around work-finishing times on any night, as people from the many surrounding workplaces pile in for a pint before going home.

Food is at lunchtimes only, served both in the bar and in the restaurant upstairs. The notices on the walls are slightly contradictory (as of February 2008); although they all agree that food is available noon-3pm Monday to Friday, and noon-5pm Sunday, one of them also claims food is available noon-5pm on Saturdays too. Not sure which to believe.

Juliet asked at the bar in May 2010 whether they allow dogs: answer is no.

The Market Porter won Beer In The Evening "Pub of the year" in 2006 and has a small stack of CAMRA awards on the back of the bar. It has an early licence for the market workers.

Accessibility: Toilets are down a flight of stairs. Even when the place isn't packed out, it can be hard to manoeuvre inside.