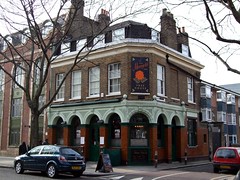 A pub on Bermondsey Street, in Bermondsey. It was refurbished in 2008, and at some point prior to that was known as the Hand & Marigold.

Unlike many of the other places further up Bermondsey Street, the Marigold is not gentrified. Instead, it's really rather nice in a traditional-pub way; the decor is interesting without being fussy, and the place is kept clean. The floor is dark varnished wood, and the tables are wrought-iron with varnished wooden tops. Large arched windows let in plenty of light, though frosted glass features at the bottom provide a little privacy (and also a space to spell out "SE1" and the name of the pub in ornate lettering). The high ceiling and mirrors on the walls add to the feeling of spaciousness. A covered seating area on the pavement out the front caters for smokers.

Kake visited on a Tuesday afternoon in July 2010. Music was playing — initially ABBA, later Phil Collins. There was also horseracing on the TV with the sound on. Several other customers were in, mostly watching and chatting about the horseracing. Doom Bar from the single handpump was £1.55/half (according to the BITE comments linked below, the real ale changes regularly).

As of November 2008, food is served at lunchtimes, until around 2pm. On secretlondon's November 2008 visit, a steak sandwich and chips photo with half a Coke was £4.65.

The pub has boardgames, a jukebox, and a "multi game" arcade table.

Accessibility: One step up to get in. No additional steps to toilets.