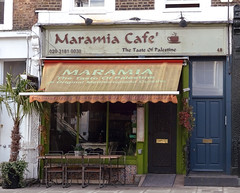 Quite some effort and taste has been applied to the decoration to evoke a feeling of the region, although less limber diners will be glad that this doesn't extend as far as the low tables and chairs common around the Eastern Mediterranean region. Paintings and photos of Palestinian places and people adorn the walls, candles sit in empty wine bottles on the tables, and ornate brass lampshades hang from the ceiling photo. At the back, a wooden archway offers a partial view onto the kitchen. It seats around 34, though it should be noted that three of the tables are for groups of six.

itsbruce first visited with three friends in January 2011. All of us were thrilled by the quality of the mezze selection we had for starters; itsbruce thought they were possibly the best mezze he had ever tasted. All the dishes were very freshly prepared and very carefully seasoned, so that there was a lovely clarity and crispness to the flavours. The two standout dishes were the hummus, which had people fighting for the final scraps, and the fattush salad (a mixed salad with toasted pitta bread). Also worthy of mention was a dish of spiced sausages in which the sliced tomato accompaniment was as delicious as the meat.

For a main course, we each selected a different grill, all of which came served on Arabic bread with a generous portion of salad. The chicken and lamb kababs were tender and very lightly seasoned, and the kofte were subtly flavoured with cinammon and sumac. While the main courses were well received, the consensus was that they weren't the same stunning triumph as the mezze. The Lebanese rosé recommended by the staff was very drinkable but nothing amazing.

Service was very friendly and helpful but restrained, so we never felt pressured or harassed. The starters took a little while to arrive but there was no complaint as they had been made completely from scratch (we had a clear view into the kitchen from our table). Our bill, including two bottles of wine, came to £74 not including service.

itsbruce returned on a Saturday morning near the end of February 2011 to try the set breakfast (£6.50) photo, which consisted of an egg poached in a spicy tomato sauce, a strongly seasoned salad, hummus, two different kinds of spiced potato cake, falafel, a kind of potato hash, two flatbreads, and a choice of drink (I had mint tea). It was nicely presented, entirely suitable for non-vegan vegetarians, really very good, and surprisingly filling (two flatbreads was more than I needed). (Note that as of early 2018, they no longer open for breakfast.)

When Kake visited around 4pm on a Wednesday afternoon in January 2018, there were unsurprisingly no other customers, though a couple more arrived just as I was leaving. Music was playing, not too loud.

Lentil soup (£5) photo was quite thin, but well flavoured and with a smooth texture. Although delicious, it seemed a little overpriced for what it was. Arayes (£5) photo was a generously-sized pile of grilled flatbread stuffed with lamb mince. The bread had a crisp crackly surface, though unfortunately verging on burnt in places, but fresh enough and with just the right amount of chew. The lamb had a good texture, but I'd have preferred a bit more seasoning. There was a sprinkling of sumac over the top of the pile, which worked really well, and I wished there had also been some on the lower layers.

Fresh lemon and mint juice (£3.50) photo was very good; not too sweet, and nicely tart and refreshing, though it did get somewhat "bitty" towards the bottom. It was served at room temperature rather than chilled, which worked well.

Service was fine. Although the menu says that a 12.5% service charge will be added, mine was rounded down to make the bill an even £15.

itsbruce's verdict: A lovely evening and some terrific food. I and the three others I visited with would highly recommend the Maramia Café.

Kake's verdict: I'd like to come back and try more of the menu. I'd happily eat the same meal again, too.

Accessibility: A ramp to get in, and a step to the toilet.