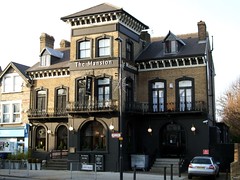 A grand pub not too far from Gipsy Hill Station, on the borders of West Dulwich. It has apparently been made over by the people behind The Rye pub in Peckham, and in March 2011 was purchased by Capital Pub Company. (The review below dates from when the pub was owned by Punch Taverns.)

Inside, there's plenty of space. Tables are arranged by the front windows, and couches to the side, with further tables lining the corridor leading to the back of building, and then another large room down some stairs, overlooked by the open kitchen. There is also a large beer garden on a well-manicured lawn out the back.

They have only one handpump, with Black Sheep Bitter on a December 2008 visit. Leffe, Staropramen, Addlestone's and the usual range of lagers is available on draught. A wine list is chalked behind the bar, with large glasses (175ml; small glasses are 125ml) at £3.50-£4.

Food is served, with mains hovering around the £10-£13 mark. Ewan tried the leek & caerphilly sausages with a mash on the side (this was charged extra), and although dubious about how just the sausages could cost £10, turned out to be very substantially sized -- more like slightly sausage-shaped fried patties, on a bed of spinach photo. On the whole, plenty of flavour.