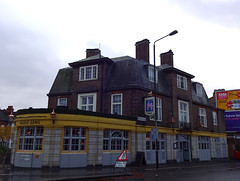 Gastropub in Streatham. It was acquired, refurbished, and reopened by Young's in 2019 (see older version of this page for a description of the pre-Young's days).

It certainly seems to be aiming upmarket, with smart but not overly-fussy decor. A wooden floor is underfoot, and the bar is faced with wooden panels. An open kitchen sits behind the long curving bar, and there's a beer garden out the back.

Kake visited on a Tuesday lunchtime in November 2019. I was the only customer, and was provided with table service for both food and drinks. There were two real ales on handpump: St Austell Proper Job and Young's London Original. A pint of lime and soda was £1.15.

According to the Manor Arms website as of November 2019, food is served noon-10pm every day. Kake's grilled peach and ham salad (£12) photo was advertised as a main course, though perhaps not really substantial enough to be one. The overall idea of the dish was good, though, even if details of the execution were not quite there. The out-of-season peaches were underripe, and grilling only went so far to rescuing them. The dressing appeared to mainly consist of oil, with no emulsifier (e.g. mustard) to prevent the oil from wilting the salad leaves. However, roasted hazelnuts (an unannounced substitution for the walnuts specified on the menu) gave extra crunch and flavour, and the ham was good quality.

Laptop-friendliness: They have WiFi, which requires filling in a form asking for email address and several personal details (though these aren't verified). There are at least four plug sockets available.

Child-friendliness: The previous incarnation was very child-friendly, but it's not clear how much of this has carried through. They do have a children's menu, with half a dozen options including three vegetarian, and it does look relatively interesting as children's menus go.

Accessibility: A step to get in — not huge, but probably too big for some wheelchair users. There is an accessible toilet though. Three steps to get into the beer garden.