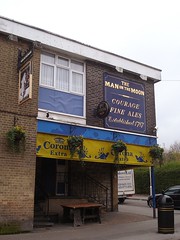 It's divided into two parts, front and back, neither with much natural light. The front room has small windows, and the windowsills are crowded with sports memorabilia — signed photos, trophies, and the like. It has seating for around 25 people in a U-shaped banquette area opposite the bar, with tightly-crowded tables. The bar is lined with barstools, and there's also a small amount of standing room. The flooring is blue textured lino, the curtains are striped and valenced, and there's a dartboard in an alcove next to the bar. The feel is rather like that of a social club. The back room is a little different (see Pubs Galore comments linked below).

Kake visited on a Monday afternoon in November 2011. I couldn't work out from the outside whether it was actually open or not, but it turned out that it was. The two handpumps on the bar were clipped for Adnams Lighthouse and Courage Best, but only the Best was on (£1.50/half); it was in fine enough condition. They also had keg Toby Bitter on tap, Bulmers and Strongbow cider, and probably a lager or two as well.

There were four other customers in when I arrived around 3pm, all sitting on stools at the bar and chatting about the horseracing showing on the flatscreen mounted over the door. A few more people arrived during my visit, and everyone seemed to know each other. I got the impression that it was very much a regulars' pub, but that nobody minded me being there at all. Service was friendly.

I did feel a little less comfortable when I ventured into the back room (to find the ladies'); there were some younger people in there standing around drinking from bottles, and the lighting was dimmer. If I came back, I'd stick to the front part.

Accessibility: Four or five steps to get in, with a handrail.