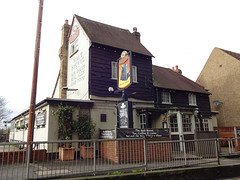 Young's pub in Dartford, in the Good Beer Guide.

Unusually, it retains a separation between the two front bars, each with its own entrance and no internal connection. Both bars are quite characterful, with hardwood floors and low ceilings. The left-hand one features a dresser filled with dictionaries, copies of CAMRA's Good Beer Guide, and local CAMRA publications. An actual malt shovel is mounted near the ceiling, and the mantelpiece of the brick fireplace is crowded with copper utensils clustering on either side of a mantel clock photo. Further back, the space opens out into a light, bright conservatory-style extension, from which the beer garden is accessed.

Kake visited on a Wednesday afternoon in November 2015. Arriving just before 3pm, I was the first customer of the day, though a couple more turned up shortly afterwards. (The pub normally opens at noon on Wednesdays, but according to a sign on the door it opened late today.) Service was extremely taciturn, both with me and with the other customers, which put rather a dampener on the atmosphere. No music was playing, and the place was fairly quiet throughout my visit.

There were four real ales on: Young's Special, Ordinary, and Winter Warmer (£1.90/half), plus St Austell Tribute.

Accessibility: A step into the front patio, and a small step from there into the pub. No further steps to the toilets.