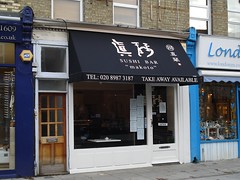 Sushi place on Devonshire Road in Chiswick. It's pretty small, seating only around 14 or 15 people; there's seating for seven or eight people at the counter and then three tables which can take two, two, and three people respectively. They also do takeaway.

bob visited on a Wednesday lunchtime in September 2008, just a month after it first opened. While the counter seating was full, there were two free tables. I had the sushi and sashimi set lunch for £9.60 photo. This consisted of seven pieces of sashimi (three salmon, two tuna, and two unidentified white fish), seven pieces of sushi, miso soup, pickles, a bowl of rice and a side salad. It was all very tasty and certainly good value. I also had grilled eel nigiri (£5.80) and sea urchin nigiri (£8), both very good. The sea urchin was certainly fresh and tasted of the sea.

On a subsequent visit bob had the lunch special which was grilled smoked eel with rice (£10.50) photo. This was a generous portion and very tasty. Jack had the chirashi (around £10) photo, which looked very good. Green tea was £1.50. On this second visit we sat at the sushi bar so could watch the chef work. He was very methodical and obviously knew where everything was and how to do everything.

In June 2009, Kake, bob, Leon, and friends visited for a Thursday Perlmongers lunch. There were eight of us, so we made sure to arrive at opening time; they wouldn't have been able to fit us in otherwise, and we did note some other potential customers were later turned away disappointed. They were also advising people that there would be a long wait for takeaway. This was possibly our fault, as we were taking up more than half of the restaurant. The food was good as always. Kake had the sashimi set lunch photo, which was notable for its artisitic presentation of the "sweet" (raw) prawns.

There are several other lunch specials which look like good value. The normal menu also looks reasonably priced.

Accessibility: The restaurant is all on one floor and has no step. There is probably enough room for a wheelchair at one table. There probably isn't room to get a wheelchair to the toilets and there certainly isn't a big bathroom.