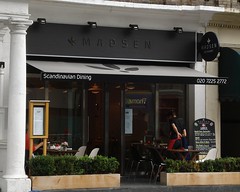 Scandinavian restaurant in South Kensington very near the station.

Inside, the decor is clean and fresh, with white-painted brick walls and pale wood floor and tables set off by the red banquette along one wall and the tealights burning (even at lunchtime) in little red holders on each table. Full-length windows at the front let the light in. Moulded pale wood chairs have large (intentional) holes at the back for your bum to hang out of. There are also two tables in a little patio area on the street outside, with four seats at each, and a couple more seats at the bar in the back.

Kake visited on a Wednesday late lunchtime in July 2009. There are separate lunch and dinner menus. The lunch menu is based around smørrebrød (Danish open sandwiches), and the recommendation is that you choose two cold or one hot. I had the herring platter (£8 for the medium size) and the three-piece smushi selection (£5), smushi being mini versions of smørrebrød.

The herring platter photo included three types of cured herring along with a green salad, some buttered rye bread, and a lightly curried apple/mayonnaise salad. The green salad had no dressing; this was a good thing in context, since it meant the leaves could be used to soak up the extra juices from the herring. The bread was fine. The crunch and freshness of the apple in the apple salad was a welcome foil to the soft richness of the herring, but I think I'd have preferred to have some non-mayonnaised apple as well. The beetroot-cured herring had a pleasant, subtle beetroot flavour, but I found the other two types indistinguishable in terms of flavour. On asking the waitress, I learned that one was cured with onion and the other with dill and mustard, but I still couldn't taste either dill or mustard in the relevant herring.

The smushi selection photo included thinly-sliced ham with tomato and asparagus; tomato with onion; and smoked salmon with cucumber. It was all fine, but I would have preferred it without the globs of mayonnaise that sat on each one.

Tap water arrived in a huge jug. I also had a glass of El Muro Blanco (£4), which was fine.

Accessibility: One very high step up to get in. Toilets are down a flight of stairs.