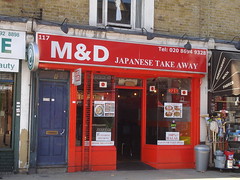 Japanese restaurant and takeaway in Deptford. According to a sign in the window in November 2014, all their food is halal. They also do delivery, with online ordering via Just Eat.

It's fairly small inside, but there's a reasonable amount of seating photo.

The chicken in the spicy chicken rolls was a little dry, and included a couple of very chewy bits. The rolls themselves were a little bigger than ideal, making them tricky to eat. The spice level was nicely judged.

The nigiri in the salmon platter were also larger than ideal, and the sharply rectangular corners suggested they weren't hand-formed. The rice was seasoned well, but somewhat stodgy in texture. The salmon was cut rather haphazardly, and one of the pieces of sashimi contained a large piece of chewy connective tissue. The avocado was good, though; ripe without being mushy.

Kake's verdict: Overall, it was OK, but I'm not sure I'd bother again. They do hot food too, though, which might be a bit better.

Accessibility: A shallow ramp to get in. Toilets not checked.