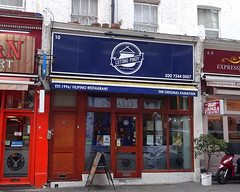 On entry, staff wait to greet you behind a small thatched-hut-style counter to one side. There's seating for about a dozen people on this level, along with a buffet station at the back. Up a half-flight of stairs is seating for another 20. Filipino art and memorabilia hang on the pastel walls, varnished boards are underfoot, and lighting comes from small recessed spotlights in the ceiling. Mirrors are used effectively to make the space look larger.

The buffet is all-you-can-eat, but a sign exhorts you to only take as much as you can actually finish, and warns that there's a 50% extra charge for food wastage. They also do kamayan (which must be booked in advance) — a meal for 4 or more people served on banana leaves and eaten with one's hands.

Kake first visited late on a Thursday lunchtime (around 2pm) in August 2008. There were two other customers when I arrived; an adult and toddler sampling the buffet. A couple of other eat-in customers turned up while I was there, as well as two people who came for a takeaway from the buffet — rather than them serving themselves, their takeaway boxes were filled by one of the staff; this may have been because they were regulars though. There was a TV mounted up by the ceiling at the back of the room, playing some kind of Filipino game show.

Pork adobo (somewhere around £5.50) was OK; the meat itself was fine, being tender yet still with some texture, but the sauce was a bit lacking in sourness (as noted in the Chowhound thread below). The pork had a good balance between meat and fat, and the oiliness of the dish was just about right. I had this with plain white rice, some of which was fine but the rest was overcooked and mushy. I also got some pork lumpia (spring rolls) to take away; they were fine without being anything special.

On another visit in November 2017, Kake and friends had the kamayan, choosing chicken adobo, daing na bangus, pinakbet, and lechon kawali for our main dishes — the deal also included soup, rice, spring rolls, fried plantain, and salad (£17/head) photo. The soup was very good, clearly made with proper home-made stock. Fried plantain was also good, properly soft without falling apart, and not too sweet. The rice, as on our previous visit, was overcooked and mushy in places, which was a little disappointing.

The chicken adobo was made with chicken wings, and a little drier than ideal; as before with the pork adobo, it could have done with more sourness too. Daing na bangus (deep-fried marinated milkfish) was great, though, fried to such crispiness that every bit of the head was edible yet the flesh was still moist; we were hunting through the pile of food for more bits of this well before we ran out of anything else. Pinakbet (stewed vegetables with pork) was cooked soft but not overcooked, and the lechon kawali (deep-fried pork belly) had a good texture and good balance of meat and fat.

It was quite full when we arrived a little before 6:30pm, and we were glad we'd booked. Service was fine, though they had got confused over the size of our booking, which led to a bit of table rearrangement.

Accessibility: A step to get in, and another half-flight of steps to get to the upper seating level and toilets. The buffet is located on the lower level.